A few years ago I witnessed some ‘heavy weather’ on the coast at Bamburgh, by the lighthouse just north of the castle , and have been meaning to do something with it ever since. As any surfer will tell you the strong offshore winds held up the waves, increasing their size as they came tumbling in to shore. Crouched in the shelter of some rocks on the beach I made some sketches and the idea for this painting developed.

A party of gannets glided past, dipping out of sight in the troughs of the waves and remerging to wheel in long, sweeping arcs before diappearing again. In the way of many seabirds  they  seemed utterly unfazed by the stormy conditions.

It is just possible  to make out a bit of the Farne Islands on the right-hand horizon. 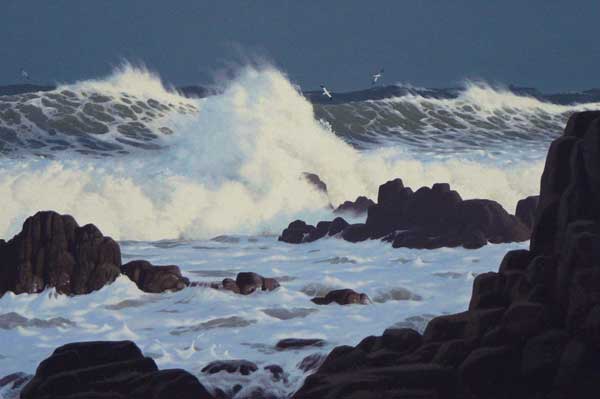