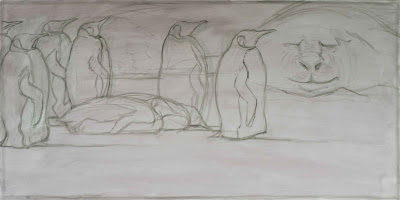 This is the first stage of a new oil painting – king penguins and elephant seals sitting out a sand storm on the beach. I’ve drawn in the figures in thin oil paint. I use paint rather than pencil or charcoal because it’s easy to wipe out without making a mess.

Here I am adding some form and shading to the drawing, again using thin oil paint.

At the end of the first day I have the basic composition drawn in. 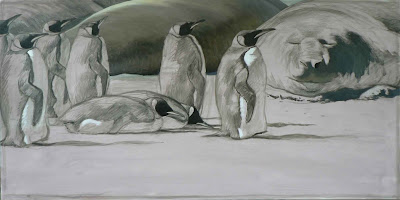 I’ve started adding some local colour, roughly and still using quite a thin mix, just get a quick idea of how the colours will work over the whole picture.

I have added some white on the sunlit parts of the penguins’ breasts. This will be the lightest tone in the painting so, together with the dark of the heads, I have the extremes of the tonal range established early on. I’m enjoying working on the elephant seal’s head! 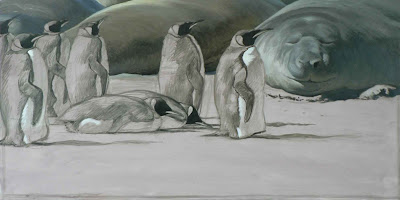 By the end of the second day I have the seals roughly painted in. I will go back over these when this thin layer is dry, refining the colours and textures of their fur. Next I am going to give the penguins the same treatment. 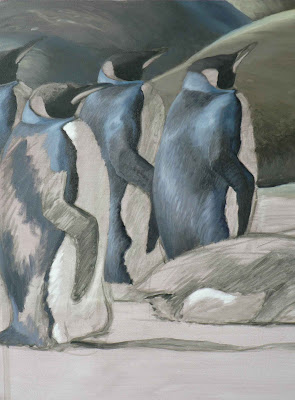 Here I have started roughly put in some colour on the penguins. I am working quite crudely at this stage as I try to work out the patterns of light and shade and to test out colours to see how they fit with the rest of the painting.

There is no point in working up to a high level of finish at this stage only to step back from the picture and decide that the colours or tones are all wrong. 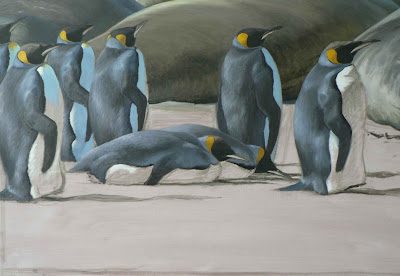 I’ve more-or-less finished blocking in the penguins; just a few of the white underparts to fill in. 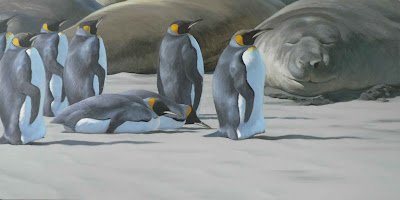 I’ve finished blocking in the penguins and have started on the sand. I’ve just painted in a ground colour on to which I will add texture. I’ve indicated slight undulations in the sand using a slightly darker colour. 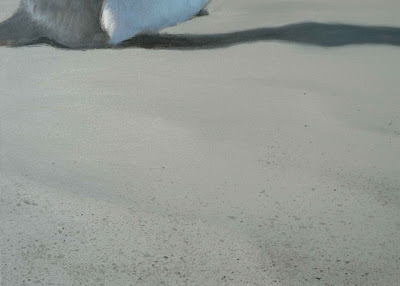 A detail of the bottom of the picture where I’ve begun adding texture by splattering on darker paint by dragging my finger across an old toothbrush loaded with well diluted paint.

By holding the toothbrush at an oblique angle to the picture surface I can produce roughly oval-shaped spatters that align in a horizontal direction, mimicking shadows cast from a low sun on the sand’s surface. 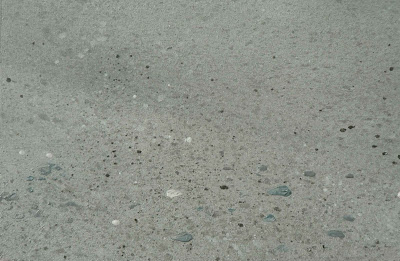 A detail of a finished patch of sand. Over the dark spatters I then sprayed on a lighter colour using the same technique. In theory some of these lighter spatters will overlay parts of the darker ones giving the impression of grains of sand.

Had I wanted to create a pitted surface I would have put the light colour on first and overlaid with the dark, giving the appearance of tiny dimples where the dark spots partly obscure the lighter ones.

I have then added a few larger ‘grains’ by dabbing the paint on with the tip of a painting knife, again putting dark spots on first and slightly offsetting lighter spots on top of these but just to their right, thus giving the appearance of cast shadows. 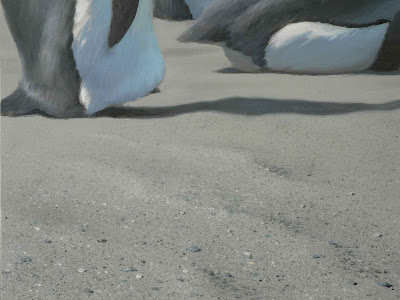 After a bit of work with the tip of the palette knife dragged across with darker paint to give shadow, the bottom left-hand corner of the sand is finished. 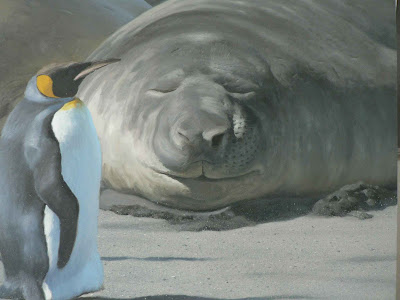 I’ve painted the top and shaded right-hand side of the elepahant seal and am now working around the face, putting in texture and detail. The wet sand pushed out from under the seal has also been finished. 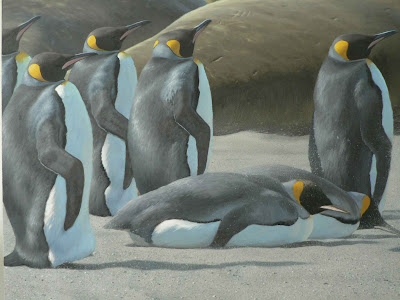 Having completed the seals and sprayed on the wind-blown sand in front of them I have now started working on the penguins. I’ve done the heads and grey backs of the three and a bit left-hand standing birds. 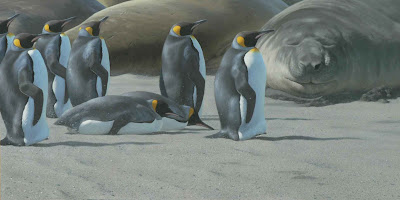 2 Responses to Elephants and Kings