This is the first stage of a painting from my trip to South Georgia. A gentoo penguin waddling up the beach amongst the ice flotsam which has been washed ashore from a glacier. This will be an oil painting measuring 24″ x 30″. 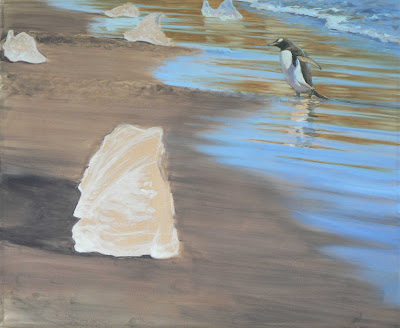 I’ve added some local colour in a thin oil wash to quickly give me an idea of how the whole painting is looking. I’m not entirely happy with the shape of the foreground bergy-bit; although true to the shape of the real piece I sketched in the field I think the vertical right-hand edge stops the flow of the composition so I might change its shape slightly.

I’m also not sure that the penguin is in quite the right place, although I’m reluctant to re-draw it as I am pleased with the shape and it is often difficult to recapture that a second time. 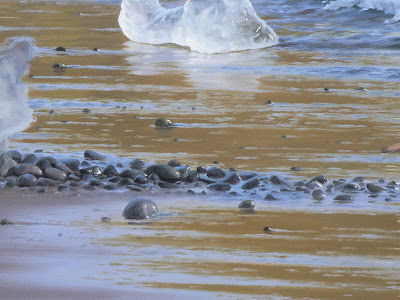 I’ve painted the sea, the first (most distant) area of wet sand, some pebbles and one bergy bit. This is quite a small part of the total area of the painting but encompasses most of the elements so it is good to get this bit done as I feel a bit more confident about tackling the rest. 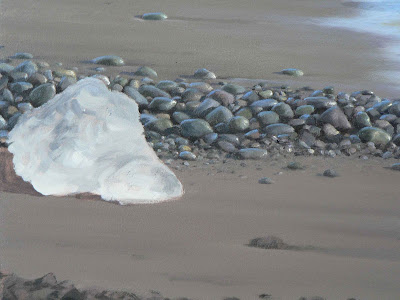 Detail: This is just a close-up of some of the finished pebbles. One has to resist the temptation to plant little white highlights on every pebble to indicate wetness, but most have a thin blue halo over their upper surface where the blue sky is reflected in the wet film covering them. The bergy bit is still in the original, crude, roughed-in stage 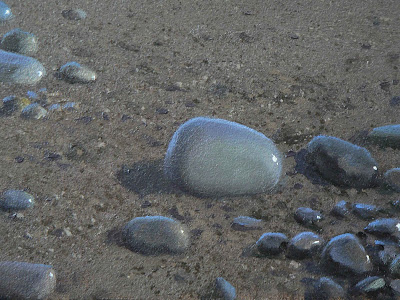 Detail: A detail of the foreground pebbles and sand. I’ve used an old toothbrush to spatter paint on to the sand to give texture. I started by spattering on a dark colour and followed this with a light colour, the idea being that the light ‘droplets’ will randomly sit on top of the darker ones to give the impression of grains of sand.

Had I wanted to produce a pitted-looking surface I would have applied the light spatters first followed by the dark. I then pick out just a few of the more obvious blobs of light or dark and emphasise and refine them with the tip of a palette knife, which enhances the overall effect. 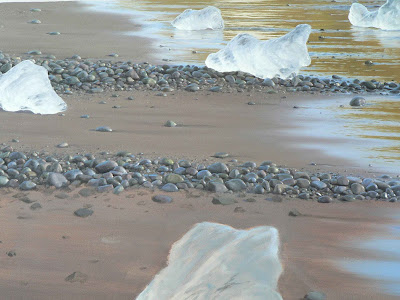 The pebbles are more or less finished and I’ve tackled some of the more distant bergy bits. Next will be the foreground sand and the wet sand on the lower right of the picture. 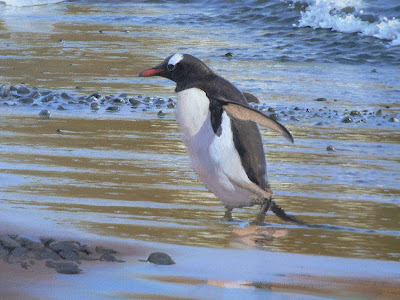 I’ve started on the penguin – the beak and head are nearly done and I’ve added a bit more white to the sunlit underparts. I’ve also slightly altered the angle of shadow cast by the wing over the flank as I realise that the sun is low in the sky so the shadow should be a bit more horiziontal. 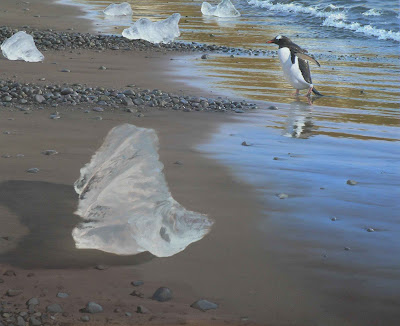 The penguin is complete and I’ve started working on the sand in the foreground. I’ve also painted in the shadow cast by the nearest block of ice – the semi-transparent nature of the ice allows light to shine through it and it acts a little bit like a lens, focussing light in patches on to the sand within the area of shadow. 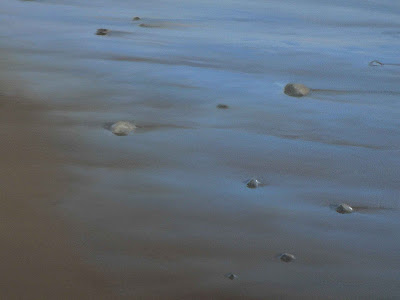 Detail: I’m working on the wet sand. The foreground pebbles are complete. Tone and colour are particularly critical here if I am to achieve the desired effect of wet sand so I have spent quite a bit of time mixing colours and trying them out on the painting, making minor adjustments along the way until I was happy with the colour range. 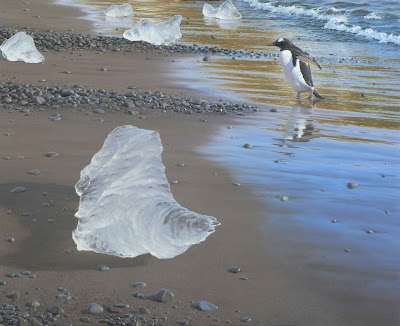 This painting will form part of the ‘Artsist for Albatrosses’ exhibition in October – see my South Georgia Project page for details.