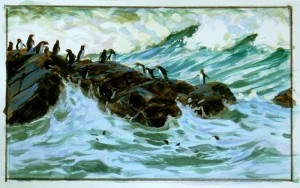 Although I don’t normally do commissions, I have been commissioned to paint macaroni penguins for a corporate client as part of their art program. This is the composition sketch (only 13cm x 18cm) that was sent to them for approval. It was also useful for me to test out the idea and to see if the composition, colour and light work. I will now use it as the template for the studio painting. Watch this space to see the painting develop from scratch!

The final painting is to be completed on a fine grain Italian linen canvas, 28 inches x 40 inches. 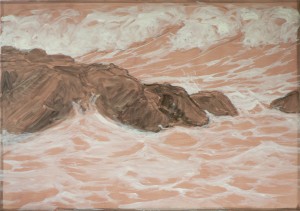 I have coloured the primed canvas a mid-tone of pinky-red. Tiny patches of this colour will show through the finished painting and, I hope, will enhance the blue-green values of the painting by offering a colour contrast. This will not be immediately obvious to the eye but will have a subtle effect nonetheless. I have roughed in the structure and basic composition in thin oil paint. This will dry very quickly and tomorrow I will be able to add some thin colour. 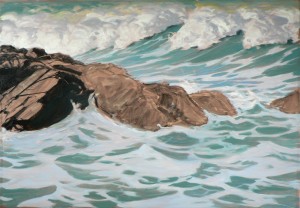 I’ve added some local colour in very thin paint to get more of a feel of how the painting looks. I’ve also started adding some structure to the rocks, using reference photos taken from various locations (mainly South Georgia) to give me an idea of how these sorts of rocks are constructed. The actual forms I am developing are entirely made up but are informed by the reference I have gathered and are influenced by the movement I want to convey in the picture. 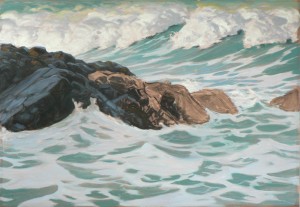 Having started by filling in the dark areas of rock I’m now adding highlights in various shades of blue-grey to indicate the wetness of the rocks, which reflect blue from the sky. 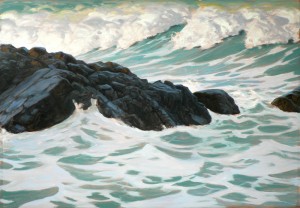 That’s the whole painting roughed in, apart from the penguins, which I’ll add after I’ve painted the background wave. 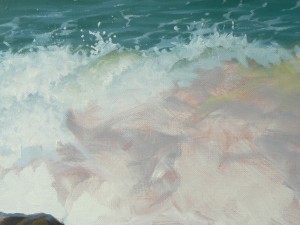 Having painted in the strip of sea behind the wave I’ve started working up the wave itself. After spending many hours watching waves coming in to the shore I have a good understanding of how they are structured and why they look the way they do. The wave I am painting is ‘made up’ but based on this underlying knowledge. 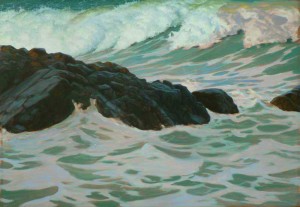 I’m working my way along the wave, building up the form. The exact nature of it is made up from my knowledge and observations of how breaking waves appear and why. 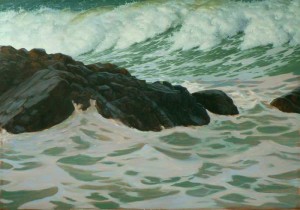 I’ve completed the breaking wave and am now painting in the water in front of it. 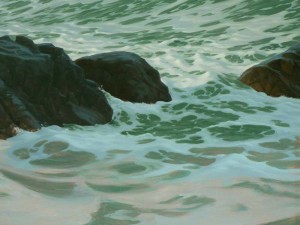 I’m gradually working my way down through the foreground sea. This area is in shadow from an unseen cliff to the left. I wanted the foreground to be darker to contrast with and add impact to the sunlit breaking wave behind. 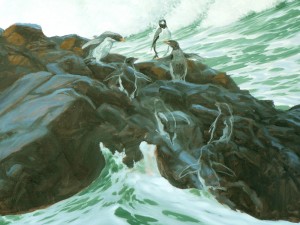 Having finished the sea I’ve started sketching in the penguins, working out where they should go and playing around with different poses and attitudes. When this is done I’ll paint the rocks to a finished stage, working around the birds. 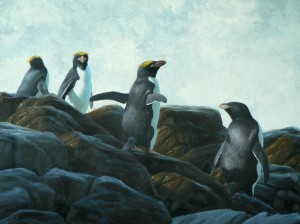 The rocks are now finished so the last stage is to work up the birds. The right-hand penguin is partly done but the first three are finished. 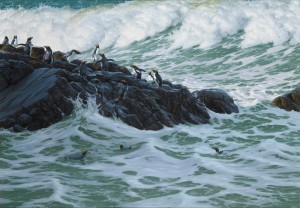 That’s it! This painting will be ‘un-veiled’ in its new home at the offices of a company in London next month.