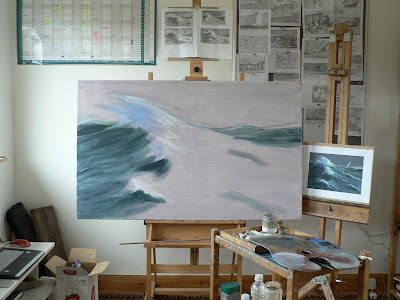 Just in the last half an hour I have started blocking in the composition. I painted a small acrylic rough version (to the right of the easel in this view) as a template because this picture is a distillation of a number of different experiences, including the very sobering one of sailing through the centre of a hurricane during the small hours of the morning!

This oil painting will, if everything goes according to plan, be auctioned to raise funds for the RSPB’s ‘Save the Albatross’ campaign. 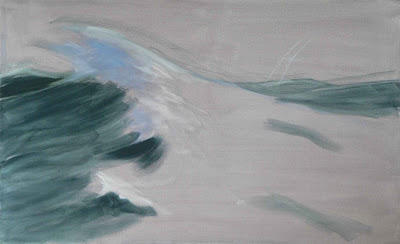 In thin oil paint I’m roughing in the wave forms and playing around with the position of the albatross. 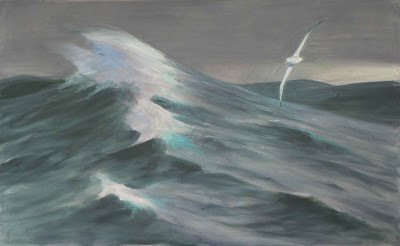 I’ve finished blocking in the composition in thin oil paint. Tomorrow I will add a little more structure and detail to the wave forms before starting to apply the paint as a finished layer. 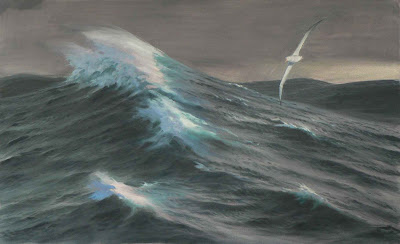 I’ve added more detail to the wave forms, putting in some of the surface ripples that go with high wind. I’ve also slightly altered the shape of the breaking wave by moving the lower end of the main foaming crest to the right a little. Before, it had seemed to chop the picture in two down the middle. 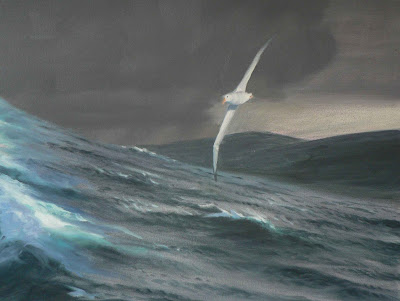 Here I’m painting in the sky a dark, stormy canopy of cloud with a hint of sunlight on the distant horizon as the tail end of the storm passes through. 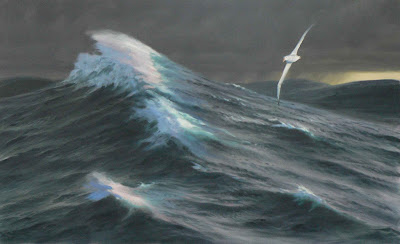 That’s the sky finished, although I’m a bit worried that the light on the horizon is too bright and detracts from the overall composition, so I may tone it down. I’ll see how it looks in the morning. 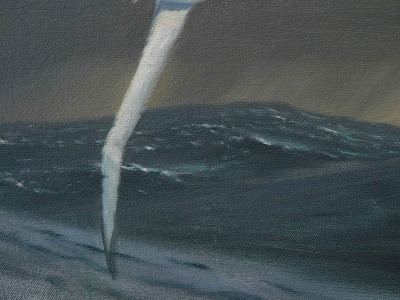 Here I have begun painting the sea in the background. Getting the colours ‘right’ is critical at this stage as these will be, broadly, the colours I will carry through the rest of the sea. It’s blowiing a gale, the sea is heavy and spray is being whipped up on the crests of the waves. 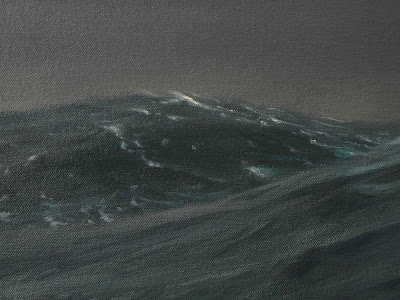 I’ve finished the background sea on the left side of the picture. Now it’s time to work on the foreground. 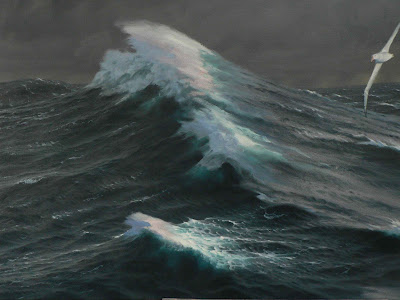 I’ve worked up the sea to the leaward side of the main wave; laying on thicker paint and developing the surface patterns on the water. Foam trails from broken waves beyond the left-hand side of the picture lie on the surface in ragged, broken lines. 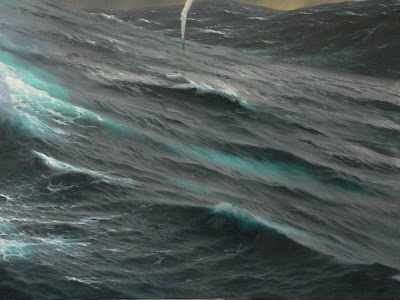 I’m adding more surface patterns and structure to the main wave, gradually working back towards the horizon. After I’ve finished developing the waves and ripples I add the spray and foam.

In these sorts of high winds even little wavelets develop a crest from which spray is whipped away. Larger waves often leave a trace of foam ground into the water below the surface, which appear as patches of mint green. 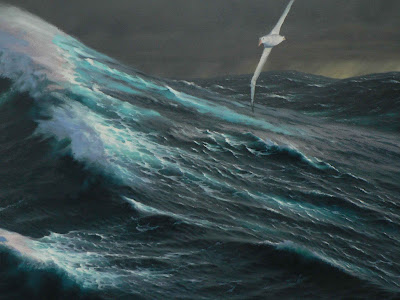 I’ve added spray and foam to the surface and have started working on the distant part of the wave. The foaming, breaking crests of the waves will be the next areas to tackle when I’ve finished the water surface. 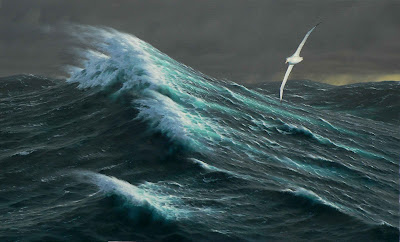 I’ve worked up the foaming wave crests and then finished off with the albatross. Having completed the painting I was unhappy with the lower wing of the bird so put the painting aside for a week.

Today I came back to it and altered the wing shape and angle very slightly and I think it is alright now, although one is never really sure…

When the painting is varnished in a few months time the darker areas of the sea will become richer and will blend more easily with the rest of the sea.

One Response to Wandering Albatross