Leaving the north-western tip of South Georgia on the 860 nautical mile voyage back to the Falkland Islands we encountered a few impressive icebergs, but this one in particular held my attention.

A great cliff of blue ice loomed skyward, three or four stories high. This majestic lump of ice appeared utterly immovable by the power of the sea while we, in our little boat, were being playfully tossed around by what this landlubber calls a “heavy swell”.

Waves crashed at its feet while black-browed albatrosses glided around its glistening buttresses. Although dwarfed by some tabular icebergs that break off from Antarctic ice sheets in chunks the size of small countries, from the vantage point of a small yacht this iceberg nevertheless commanded respect.

To try to convey the scale of the iceberg I chose to concentrate on just one part of it, allowing the viewer’s imagination to soar out of the picture along with the dramatic upward sweep of the berg. 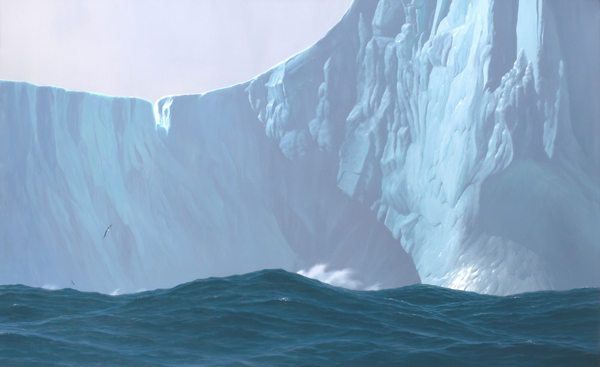