Diaz Cove on the southern shore of South Georgia is a sheltered mooring, protected from the worst ravages of the southern ocean by Poncet Island; a small, low-lying island named, to her embarrassment, after our venerable expedition leader, Sally.

Behind the mainland beach stretches a plain of grass and there I encountered a small group of king penguins in moult. Like all birds, penguins renew their feathers once a year and during this time are unable to put to sea until this waterproof, insulating layer of feathers has been replaced.

For several weeks they must stand there as the old plumage is pushed out by the new. They look even more comical at this time, sporting ridiculous, outlandish hair-dos.

Behind this group was a huddle of elephant seals undergoing the same uncomfortable process, steam rising from their warm bodies in the cool, morning air. 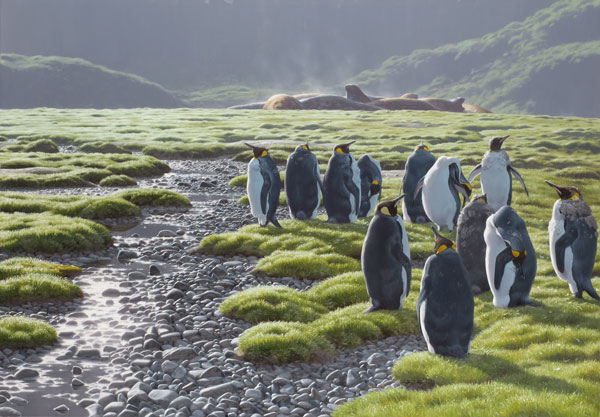