Looking down  on a sandy beach at low tide I watched this black-headed gull paddling and feeding on something in the shallows.

I am constantly fascinated by water and in this case I wanted to understand how to depict it when it is so shallow it is barely visible. I was also intrigued by the the triple imagery of the gull; we have the bird itself, a faint reflected image of it in the water, and its shadow. Because the water is so shallow and we are viewing it from a high vantage point, the shadow of the bird on the sand beneath the water’s surface is strong, while the reflection is weak. I came to understand that these are all vital elements that help to create the illusion of shallow water covering the sand. I am also attracted to repeating patterns in nature and the gentle ripples in the sand draw your eye towards the gull as the focal-point of the composition. The seaweed encroaching from the top of the picture gives weight to the piece and adds much-needed tonal contrast to an otherwise fairly uniform palette.

After the gull had left and I had finished sketching, I went down to the sand to see what it had been finding to eat. There were tiny shrimps skitting about in the shallows – the gull had been shrimping. 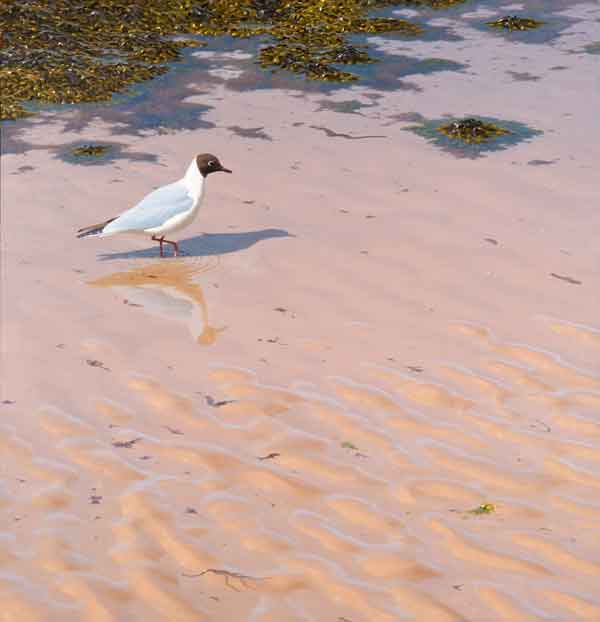